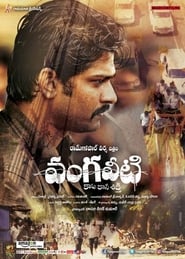 The life story of slain legislator Vangaveeti Mohan Ranga Rao who was assassinated during the NT Rama Rao regime in 1989.

The life story of slain legislator Vangaveeti Mohan Ranga Rao who was assassinated during the NT Rama Rao regime in 1989.

RGV's partially fictionalized account of real life events.. Not for everyone

Vangaveeti is one the most anticipated movies of this year. This is not a new zone for RGV where he made movies based on real life events and characters. But what makes Vangaveeti very controversial is that it deals with caste based politics that happened during the 70's and 80's in Vijayawada. Caste is a big deal in Andhra pradesh and ironically a taboo topic for any discussion. A conflict between two people belonging to two different castes led to a civil war between those two communities.

"Truth can never be concluded, everybody has their version". This basically applies to any event that happens in real life and is the same in the case of caste based politics that happened in Vijayawada. I was excited to see RGV's version of this story as he claimed he knows more than anybody else. It is true that he did so much ground work, met some of the real people involved in the crime saga and got inputs from them. Everybody knows that Vangaveeti Ranga was killed by Devineni Nehru and his group but what actually led to those events is where people had differences.

Going into the movie i had my version of the story which i developed based on my research and to an extent RGV's version went on the same lines as mine but there were certain things that took me by surprise in his version. Some of them are fictionalized and are used strictly for the dramatization reason and some of them were real which i missed.

The movie is enjoyable all along the way. The screenplay was racy except for a couple of unnecessary songs, the direction was top notch with RGV mark intensity, Camera work was fabulous. Music was amazing. I loved some of the songs and background tracks. Special mention about the cast. Sandeep who played both Vangaveeti Radha & Ranga characters gave a performance of a life time. It is certainly not easy to portray a real life character and you have no footage of him. Sandeep managed to make both the characters a cake walk and you will not believe that those two characters were performed by the same actor. Sritej who played Nehru is apt. Vamsee as Murali and Kautilya as Gandhi did a great job.

Vangaveeti is not for everyone. People who are aware of the real life events will find it interesting as you have your version and then there is RGV's and for people who aren't aware of what the fuzz is all about, you can enjoy this film as another RGV violent gang war film.

RGV delivers his best in and with VANGAVEETI, a very intense biopic/action film which is definitely not meant for the faint heart. It's the most violent film I've ever seen and even enjoyed!
Read More

Wolves are evil. But death is inevitable even to the sheepdog.

Though there is no scientific evidence* for the characterisation or categorisation of people as presented above, it's pragmatic enough. Whom Lt Col. Dave Grossman called Wolves, Nietzsche called Masters. In his On Genealogy of Morality, he presents a similar analogy, of vultures and lambs.

"There is nothing strange about the fact that lambs bear a grudge towards large birds of prey: but that is no reason to blame the large birds of prey for carrying off the little lambs. And if the lambs say to each other, 'These birds of prey are evil; and whoever is least like a bird of prey and most like its opposite, a lamb, – is good, isn't he?', then there is no reason to raise objections to this setting-up of an ideal beyond the fact that the birds of prey will view it somewhat derisively, and will perhaps say: 'We don't bear any grudge at all towards these good lambs, in fact we love them, nothing is tastier than a tender lamb.' – It is just as absurd to ask strength not to express itself as strength, not to be a desire to overthrow, crush, become master, to be a thirst for enemies, resistance and triumphs, as it is to ask weakness to express itself as strength."

A sheepdog must negotiate it's salary; wolf and vultures don't.

There is a limit to what a sheepdog can get or achieve and that limit is set by the wolf, the vulture.

A sheepdog, to be a sheepdog needs the consent of the governed, a vulture doesn't.

The vulture is evil but death is inevitable, even to the sheepdog.

In tollywood, full of sheepdog protagonists, vangaveeti does what needs to be done. Now, go watch Vangaveeti.

*Actually there is scientific evidence, according to the Big 5 model of personality, there is enough statistical evidence that some people are more agreeable than others and so on.