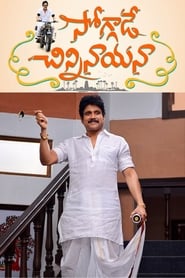 To keep her late husband's son and his wife from seeking a divorce, a widow enlists the help of her husband's spirit.

To keep her late husband's son and his wife from seeking a divorce, a widow enlists the help of her husband's spirit.

After the consecutive flops like Bhai & Greekuveerudu, Nagarjuna Bounced Back with Manam and a successful TV Show MEK. Now his latest flick #SoggadeChinniNayana has created a lot of buzz with the trailers, Nag's look & funny dialect. Basically the plot of the movie very simple: Couple Ramu(Young Nag) & Sita seeks for a divorce. How his father's soul Bangaraju(Again it is Nag) will come down to earth and solve his son's problem & along with that he solves one more mystery. Yes, the plot is like Old wine in New bottle but the way director treated the plot is quite refreshing.

First half is extremely convincing and it goes with a promising pace. Second half has some dull moments which will make you feel bored for sometime. Again Pre-climax & climax episodes picks up and will connect all the dots to keep it engaging. Looks like writers Ram Mohan P & Satyanand has taken a old reference in script writing, to get a family entertainer, in which they are partially successful. Debutant Director Kalyan Krishna has handled amazingly till interval block but he could have worked better for second half. Overall it is a decent job from a new comer. Anup Rubens once again nailed it with melodious tunes & good bg score. 'Dikka Dikka Dumb Dumb' & 'Soggade Chinni Nayana' are my favorite picks in the album. No doubt these songs would have gone for caller tunes already. The Cinematography is in tune with Village subject, especially while capturing the nativity. Even the computer graphics work in socio fantasy episodes is upto the mark. Always production values from Annapurna Studios are very rich.

Strengths of the film are good performances from the lead cast. Nagarjuna's acting as Bangaraju & Ram is just spellbound & amazing. He simply mesmerizes with his cheerfulness, energy, Panchikattu look, Rayban Glasses & Godavari slang(especially Oothapadalu like Vaasi Vaadu Thasthadiyya, teetinlu..;) ) Ramya Krishna once again steals the show, looks like her second innings is going strong with films like this & Bahubali. Lavanya tripati is Gorgeous and given a matured performance. Brahmi is quite hilarious. Surprise Cameos from Anushka Shetty, popular anchor Anasuya, Hamsa Nandhini, Diksha Panth are very well suited in the story flow. Rest all casting has nothing exceptional to do.

Among glitzy, formulaic & commercial films which are giving really a tough time to audience, surprisingly this film revives a simple family drama with a small pinch of Supernatural. Film raises our expectations in the beginning but looses pace in the middle and picks up in the ending. Considering the low budget and good star cast, this will definitely be a profitable venture for Nagarjuna. Although the film has few mistakes, but film is one time watch. It is just Nag's show all the way!! Manam, MEK and now it is SCN, Wah! What a ride:)

After a long time i have seen a beautiful movie with village backdrop and old fashion costumes. A festival treat for all telugu audience. Nagarjuna dual role action was awesome and he alone nailed it. The cinematography was excellent. Ramya and Lavanya were superb. Anup gave great music and background. Overall a feel good family entertainer movie. Story was normal but take was good by new director kalyan. the comedy is good. Nagarjuna slang and dialogues were really excellent and were very different. Emotional scenes were good and Husband and wife relation importance and message is good.Bangarraju role was my favorite one. Ramu character is very cute. All can watch with their families and friends for this festive season.

Pros: Ramya Krishnas action which is good as usual. Heroine was OK. Songs were average to above average. here and there jokes.

Cons: couple of scenes slightly scary for young children. cheap romance and forced comedy. cooked up scenes for the title song. draggy for most part. mix of old movies like yamudiki mogudu and yamagola and murari etc.

Movie is strictly for Nagarjuna mass movie fans. A B grade movie which is OK to watch at home. No nice visuals or song locations.

Highly recommend to watch at home once it is available online. Manam movie was lot better than this movie.

Keep out if you are not a Nagarjuna fan.

Nagarjuna should really act his age. Going into his sons body to flirt with his daughter-in law is a disgusting concept.