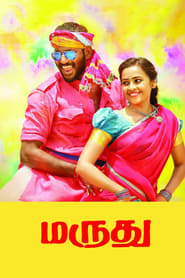 Maruthu is a rustic action entertainer where Vishal plays the role of a labourer. The story revolves around his relationship with his grandmother.

Maruthu is a rustic action entertainer where Vishal plays the role of a labourer. The story revolves around his relationship with his grandmother.

Director Muthaiah of Kutti Puli and Komban fame teams with macho Vishal for one more flick, which again is a village based subject which the director is known for.

Marudhu checks in right in all the boxes that such films are known to have in them as ingredients. There is a lot of sentiment in Marudhu but this time we feel it between the hero and his granny. There is love and there is action which in fact is overloaded to justify the U/A certification. And there are also pearls of wisdom from almost every character in the film. For all those proverb lovers, Marudhu offers plenty.

The template is standard. There is Vishal on one side, who is the personification of all things good which is conveyed by his crony Soori at the start, quantified by an intro number. Vishal shows off his gym toned body with a lion's face tattooed on his forearms and torso. There are bad men on the other side who swish their aruva like how normal humans swing their mosquito bat. The good and the evil cross path and we have Marudhu.

The initial scenes give us a feel that the story is going to be between the two local warring groups. And then, the film shifts to a romantic focus which after a while gets too tedious. And then we shift back to action. There is a lot of predictability about the film, which makes Muthiah lose his grip over the audience.

What is interesting in Marudhu is the characterization of its women. All the women who are shown, be it on the good side or on the other side, they are very strong and not the meek ones we come across every Friday. Kudos to Muthaiah for this!

Coming to the performance, it is an easy task for Vishal, who portrays Marudhu with all his sincerity. His action scenes show his agility and power. Sri Divya is apt as a strong village belle. RK Suresh once again proves that he is an effective villain material. As the menacing Rolex Pandian, he is perfect with his dialogue delivery and action sequences. Kulappulli Leela as Vishal's apatha could be a find of the season. But her character gets too preachy and boring after a while. Soori is his usual self and has work in the pre-interval block. Radha Ravi has a small role to play.

To cut to the chase, Marudhu could work for audiences who like to watch a rural masala flick with a lot of action.

The film is good. Vishal's fighting scenes are good. BGM is good in the movie. But the climax was very bad and very violence. Its not a superb film but it is good movie.