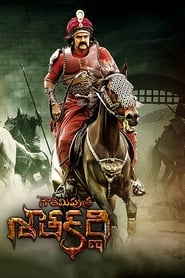 This movie chronicles the life of a South Indian ruler of the Satavahana Empire in South India in the 2nd century CE.

This movie chronicles the life of a South Indian ruler of the Satavahana Empire in South India in the 2nd century CE.

Gautamiputra Satakarni is a must watch film for its terrific performances,dialogues,top notch visuals and especially its story about an unsung Telugu emperor.

Gautamiputra Satakarni (2017): What could be more interesting than the combo of Krish and Balayya and that too as Balayya's 100th film.Curiosity is generated since the project announcement and when the news is out that Satakarni is the the great Telugu emperor who ruled a major part of India from Amaravathi.Not many people in the current generation are aware of this part of history before the announcement of this film.Director Krish who has made some memorable movies like Gamyam Vedam and recently Kanche further created huge expectations on the movie after releasing a stunning trailer. So, has this historical movie lived up to expectations?

The story of the film is based on Gautamiputra Satakarni(Balakrishna), one of the most powerful kings who belonged to the Satavahana dynasty in India.He aims to bring various states/rajyas under one rule and unite them as one country. Although his wife Vasishta Devi (Sheiya) doesn't like his war-spree, his mother Balasri (Hema Malini) supports him.After winning a major battle against western king Nahapana, he prepares to fight against external forces such as Greek King Demetrius. But this fight is not going to be on a small scale. Can Satakarni win this battle?

1)Performances: There is no doubt in saying that no one other than Nandamuri Balakrishna would have suited Satakarni's role as the star hero did. Right from Balayya's screen presence to his command over grandhika Telugu is an asset to the character.Balayya's dialogue delivery is in top form during war scenes and will surely bring goosebumps to fans all over.GPSK is one of the career best performances of Balayya.Shreya looked gorgeous and delivered wonderful performance.Her expressions in emotional scenes are very good.Hema Malini gave decent performance.The actress who played the Greek soldier role is seductive.

2)Dialogues: Dialogues are written beautifully by Sai Madhav and also mouthed by Balakrishna effectively.Krish films are well known for its meaningful thought provoking dialogues and this movie got plenty of them.Many dialogues are striking and entire credit goes to Sai Madhav for his talent for writing effective dialogues in Grandhika Telugu.

3)Cinematography and Visuals: Gnana Sekhar's excellent cinematography is the major highlight, he has filmed war sequences with aplomb. His eye for detailing has made the frames perfect.Gautamiputra Satakarni has some top class technical values.The movie has superb art work and graphical output. Visual effects in war sequences are terrific.

4)Direction: Krish should be applauded for bringing another epic heroic drama to Telugu Audience.His idea of making a biopic of an unknown ruler is a commendable job.Krish amazes everyone by opting for less CG and keeping things real. His story is very powerful and he as a director does not vary much in his narration.Kudos to him for showcasing the film in such a grand manner with whatever limited budget and resources he had (Within 80 days).

5)Costumes: This is one of the few movies where costumes,armory chose used for the war look realistic.

1)Slow Pace: Gautamiputra Satakarni is not a regular commercial masala film.Even though Krish added a bit of commercial touch in few scenes,still this movie may not go well with commercial movie lovers.War Scenes are lengthy but effective

So,Gautamiputra Satakarni is a must watch film for its terrific performances,dialogues,top notch visuals and especially its story about an unsung Telugu emperor.

"NBK Hits His Century In Style"

GPSK,marking the collaboration of Nandi award winners director Krish and veteran actor Nandamuri Balakrishna in his 100th feature film was the talk of the Tollywood industry and critics and audience were equally excited to witness the reel-life presentation of Satavahana king Gautamiputar Satakarni who's believed to unite the empire from internal conflicts and western invasions.

Spectacular preview reports,celebrity applause and initial reviews from benefit shows increased my expectations on the movie which was kept in-tact by Krish who succeeded in creating space for trademark goose-bump sequences from NBK without compromising the historical accuracy of the movie.The most striking thing to be noted here is that Krish and his team could complete the production of this epic historical drama on such big canvas in a mean span of just 79 days! Take a bow Krish __/\__ The movie started of well with a stunning intro of NBK followed by a war sequence on sea that lasted around 15 minutes.Various characters in the story-line were introduced in a short span of time and Krish could create a connect with the Telugu audience instantaneously,thanks to memorable dialogues penned by Madhav Burra that celebrates the oneness and the unity of Telugu people.

Notably,the emotional part too was given due care alongside portrayal of wars,a reason why GPSK could strike a chord with the normal front-benchers and fans of Balayya.The second and final war sequences added with interval punch were shot exceptionally well and the best fraction of the movie that's well-trimmed by Suraj Jagtap and Rama Krishna Arram at around 135 minutes.

Yet another towering performance by Balayya stamped his authority in portraying historical figures with required grandeur on silver screen.The 56-old veteran actor was at his best shooting fiery one-liners,something that he's well-known for among his die-hard fans.Age doesn't seem to have brought any low in the dedication of NBK who manged to portray the war sequence with required zeal as demanded by the screenplay.Shriya Saran as the better half of Satakarni gave a notable performance which will be counted among her best performance s in recent years.Hema Malini too did her part well as Gautami Balashri.Kannada superstar Hattrick Hero Shivaraj Kumar appeared during a stage play sequence and won the hearts with his touching performance.

On the negative side,the CGI part during the initial war sequence was bit on the lower side,but luckily made up in the course of the narration.Also,the second half could have been polished better to increase the pace of the movie.

Cinematography by Gnanasekhar was top-notch and he succeeded in capturing the details exceptionally well ,boosting the impact of war sequences in particular.Music by Bollywood composer Chirantan Bhatt who earlier collaborated with Krish for Gabbar Is Back and Kaanchi was good with the pick among the songs being the duet 'Mruga Nayanaa' sung by legend SPB and Shreya Ghoshal.The Background Score was even better and perfect for a movie of such genre.

Overall,Gautamiputra Satakarni is a pretty well-executed war drama that's sure to win the hearts of Telugu audience.

Bland and boring movie with no plot.

Gautamiputra Satakarni is a disappointment. This movie is very slow, with an extremely boring plot. The visual effects on the screen almost make you cringe, and are not fit for a war movie. It is just war, war, war, with poor effects and replaying of the same scene! Also, Balakrishna is too old to be in such a movie, and he is literally shaking while moving on the horse. Fight scenes are terrible, slow, and plainly mediocre. The only good parts of the movie is some dialogue and the screenplay of Shriya. I do not suggest going to this movie unless you have a deep love for Telugu history. I was literally trying not to sleep halfway through the film.

Couldn't bear it anymore after watching for 1/2 an hour!

I started watching this film seeing its positive feedback on IMDb. And if I'm not wrong it is one of the biggest Telugu hits of 2017. But after watching for half an hour, I couldn't bear it anymore. What a load of garbage? I don't know what kind of actor Bala Krishna is and the type of audience who actually watches such BS type movies. The movie is based on a historical character; however, no historical context or story at the beginning other than some flamboyant dialogues. Then the hero just wages war and wins everything single-handedly! I couldn't understand how this man needs an army!!!